Summer is supposed to be a time of life and youth and fun and sun and vacations and all that shit, but for me, it was the Summer of Dying.

Some stuff happened that I won’t get into here, but that was compounded when my car got rear-ended and my house was damaged by the builders next door and I had a bunch of shit stuff happen at work and my father in law is sick.

And then my dog died. 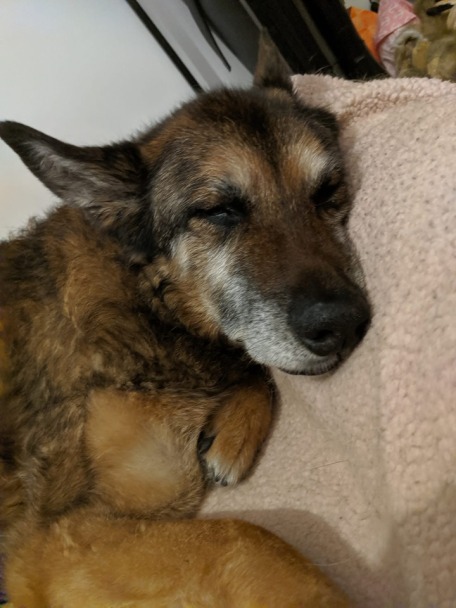 My sweet Cali. She was 14, and she was the most wonderful friend. I know everyone says their dog is the best dog, but she really was the best and most goodest girl. She was smart and funny and sweet and cute and soft. She was my best friend. I love her so much.

She died a little over a week ago. We had her cremated. I wear her remains in a locket and I touch the locket and pretend it’s her. I still talk to her when I walk in the door, even though she’s gone. I still say good night to her bed when I go upstairs.

Some may think that this is an overdetermined response to the death of a pet; to those some, I would say that you need to revisit the way you view dogs, and also, if you say that to my face, I will totally slap the shit out of you.

So it’s been a shit summer, a summer of small deaths and of one really big one. I can’t really talk about all the other ways it’s been like that, because that’s a little too personal, so you’ll just have to believe me.

I’m writing this post because A) I haven’t written one in months, and B) I’m trying to get in the mood to write, since my writing group is at my house and we’re supposed to be sitting and writing. It’s completely quiet except for my typing and LeVonne’s typing and Quentin clearing his throat and sipping his Hawaiian punch so maybe it’s not really that quiet. Zoe just sneezed. Julia just knocked on the door. It’s not completely quiet at all.

As part of my Summer of Dying, though, I’ve decided that parts of me need to die, too. The impatient, childish, temperamental parts, the parts that make horrible decisions and have a hard time functioning in the adult world. To that end, I’ve made a vow to write more, and write often, and stick with it.

I’ve been so depressed for so many reasons that my writing has suffered and pretty much fallen entirely to the wayside. But if Old Beck is going to die and New Beck is going to take her place (Spooky!), I need to get up and get going. Making myself write would be symbolic of that.

This blog post is all over the place. I’m rusty. I’m unmoored. I don’t feel like trying to fight for coherence. I also want to keep this here so I remember how I felt, and so I can try not to feel that way again. So I’m not going to edit this post or try to make it make more sense. I’m going to publish it, and then I’m going to get back to my writing, and probably also have a donut and maybe a shot of something because fuck it.

I have to drive to Newark in the morning for a hearing at which I’m going to look colossally stupid, so maybe I won’t do the shot. A 2-hour drive plus a shit hearing is no fun, even without a hangover.

Eh. This too shall pass. Chin up, Beck. You’ll be okay; you always are.